The Incredible Castles of Northumberland

Northumberland’s castles are an attraction in themselves. From the headland at Bamburgh to the hill above Dunstanburgh, the castles speak to us across the centuries and stretching as far back as the Iron Age.

Find our list of the incredible castles of Northumberland here to plan your upcoming  holiday accordingly.

Alnwick Castle is so large, so richly decorated, so comfortable, and so well-run that it’s impossible to fathom how unique it truly is in just one visit.

It is the current residence of the Duke of Northumberland. Though it is a living, breathing home, it often appears on television and film for a variety of reasons. First is it’s fairytale-like features and whimsical gargoyles. The second—for those that dare—is due to its haunted nature.

No matter your interests, Alnwick Castle is a must-see during your trip to Northumberland. 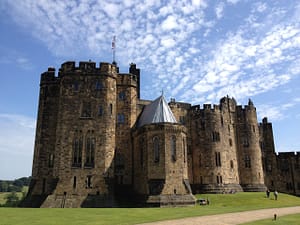 Bamburgh Castle is one of those places that feels like the end of the world. It’s perched on top of a craggy outcrop overlooking the ocean. It’s an awesome sight to behold for any traveler.

The most striking thing about Bamburgh Castle is its size. It’s tiny! Four stories high, or os, with a moat that would swallow your average house whole. It’s not so much a castle as a miniature skyscraper with battlements and arrow slits and crenellations and everything else you’d expect from a proper castle. But it doesn’t look out of place up there on its rock, because it seems so obviously to have grown out of it.

Bamburgh Castle is just one of the incredible castles of Northumberland and demonstrates just how unique this land is.

Dunstanburgh Castle is considered one of the finest examples of medieval architecture in all of England. But what’s even more impressive is just how unusual this castle is. After being destroyed by the Scots in 1316, it was never truly rebuild. So now, Dunstanburgh Castle remains a shell—a structure with no roof and broken walls that allow gorgeous views of the sea.

If there’s one incredible castle in Northumberland that always get visitors talking, it’s the ruins of Etal Castle.

Etal is a spectacular castle, perched on an outcrop of rock, with sheer drops on either side and the Tweed rushing below. It is a powerful fortress; but while its stonework is solid and intact, it is also fragile and delicate.

See for yourself how this incredible structure has stood strong since the 1400s during your visit to Northumberland.

Warkworth Castle is an impressive fortress with close links to Sir Walter Scott’s Ivanhoe. It was built around 1350 by Sir William de Forz, the Earl of Northumberland.

Warkworth Castle, which has been home to the Percy family for 700 years, is still lived in by the current Lord and Lady of the Manor. Visitors are welcome all year round and can see parts of the castle that are usually closed to the public, such as the Great Hall and Chapel, as well as exploring the grounds and dungeons.

Chillingham is one of the most fascinating places you could ever visited. It is an old English castle, but the most intriguing part is the size of it. There are at least two miles worth of corridors alone. You can get lost for hours wandering around this place, not to mention the grounds themselves.

It was built in the 1300s and modified by Sir John Vanbrugh in 1718 and has an unusual octagonal tower as well as diagonal walls. It’s also one of the few castles in Northumberland that’s still occupied by a family that has owned it since the 1400s.

A visit here will grant you unique insight into the daily lives of those who lived in Chillingham when it was first built.

Prudhoe Castle is the most complete and spectacular of the castles in Northumberland. It is a very rewarding day out for all the family and well worth a visit. The castle itself has been transformed into a stunning visitor attraction, with many interactive displays that kids will love. There’s even an albino raven!

Prudhoe Castle has also been made famous by its starring role in the TV series ‘All Creatures Great and Small’ featuring the world famous vet James Herriot. On show are some of the props from the film, including James Herriot’s stetson hat, pencils and glasses as well as original sketches by Christopher Timothy who played James Herriot.

Prudhoe is an incredible castile in Northumberland well worth a full-day family visit.

Lindisfarne Castle is a ruin. But it has a magical quality to it that many restored castles lack. Lindisfarne feels more real because it’s been left in the condition the Tudors left it in when they were done with it. It’s not an imitation of a castle, it’s a castle.

Lindisfarne Castle is one of the most well preserved castles in England, having been taken apart in the 17th century and rebuilt stone by stone in the later part of the 20th century. It was originally built in 1550, and was used as a base for raids on Scotland. The castle was never actually attacked, but it did fall into disrepair until the 20th century.

The castle is on the north end of Lindisfarne – Holy Island, from which you can easily spend an entire day exploring. From the ruins to a monastery and even simply a day on the beach with the family.

This website uses cookies to improve your experience while you navigate through the website. Out of these cookies, the cookies that are categorized as necessary are stored on your browser as they are essential for the working of basic functionalities of the website. We also use third-party cookies that help us analyze and understand how you use this website. These cookies will be stored in your browser only with your consent. You also have the option to opt-out of these cookies. But opting out of some of these cookies may have an effect on your browsing experience.
Necessary Always Enabled
Necessary cookies are absolutely essential for the website to function properly. This category only includes cookies that ensures basic functionalities and security features of the website. These cookies do not store any personal information.
Non-necessary
Any cookies that may not be particularly necessary for the website to function and is used specifically to collect user personal data via analytics, ads, other embedded contents are termed as non-necessary cookies. It is mandatory to procure user consent prior to running these cookies on your website.
SAVE & ACCEPT
Loading Comments...